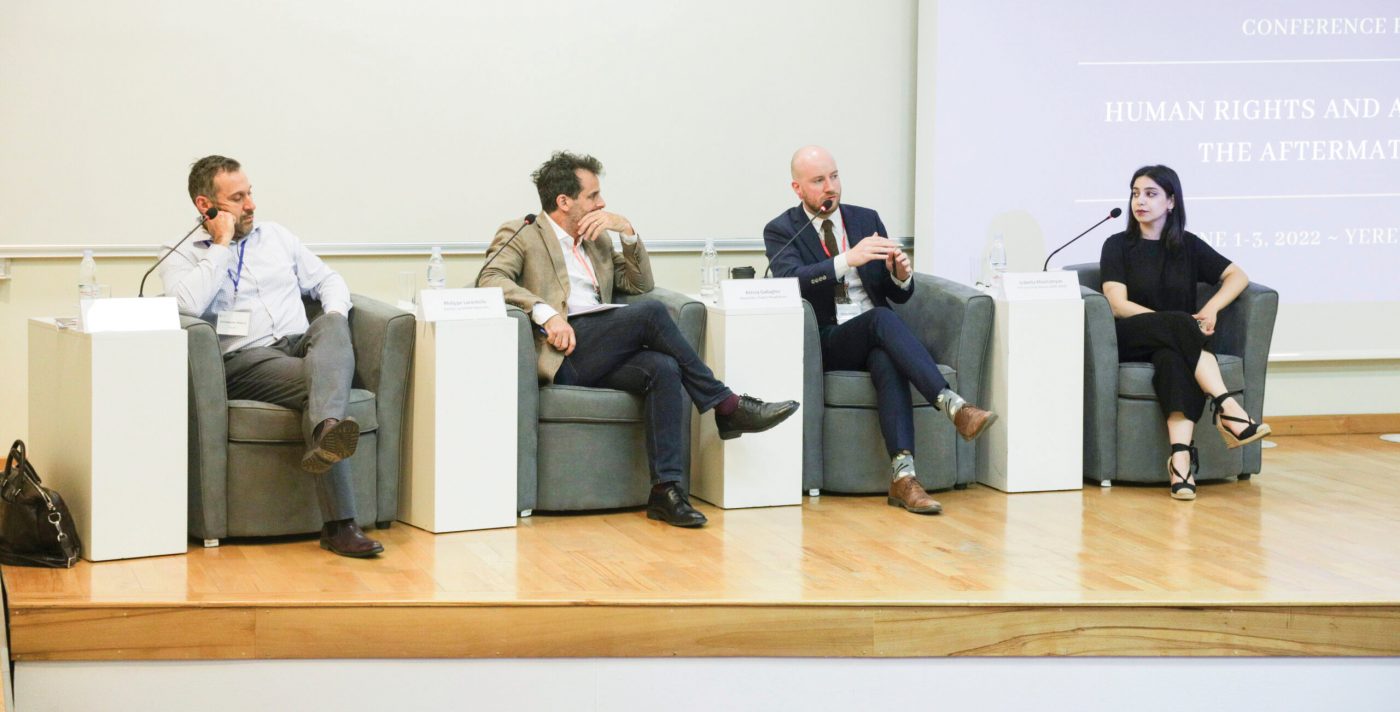 Wendy Stocker: I think that all the Ploughshares staff were slightly green with envy when we learned that you were travelling to Armenia this past June.

Kelsey Gallagher: I get that. Armenia is a very old and beautiful country. Armenians are hospitable, curious, and friendly. Armenia was a great place for a conference and is well worth a visit. It’s a bit off the beaten track, but it boasts some amazing scenery and ancient buildings, including a cathedral that is considered by many scholars to be the oldest in Christendom.

WS: I know that your primary reason for going to Armenia was to be a panelist at a conference put on by the Center for Truth and Justice. Why was a representative of Ploughshares invited?

KG: Project Ploughshares was invited to present at the conference due to our work on monitoring the diversion of Canadian weapons to the conflict in Nagorno-Karabakh. These weapons were Canadian-made targeting and surveillance sensors used on Turkish-made drones. While they were originally authorized to be exported to Turkey, the Turkish government illicitly re-exported them to their ally Azerbaijan, which made considerable use of them in the conflict.

WS: I’ve done some exploring on the conference website and learned that there were people from a range of backgrounds there. What sort of connections were you able to make that could prove useful in your future work?

KG: The CFTJ conference provided the opportunity to meet academics and practitioners working broadly in the field of human rights, including individuals building smartphone apps to log human rights violations, lawyers who litigate against corporations that contribute to conflicts, and scholars of international humanitarian law.

Meeting other practitioners working in the field of human rights monitoring is always a great opportunity. Arms control wasn’t a topic largely explored, except for the panel I presented on. Therefore, the conference provided the opportunity to meet others that are working in generally the same field, but with diverging approaches and interests. This exposure broadened my own perspective. I expect that I will find ways to interact with some of these people on projects of common interest in the future.

WS: Ploughshares hasn’t focused on the Caucasus in the past. Is this a region we should be paying attention to?

KG: We should pay close attention to all conflict-affected regions, and particularly those in which Canadian weapons play a role. This is undoubtedly the case in the Caucasus, as Canadian-made technology played an indispensable part in Azerbaijan’s military operation in the most recent bout of violence in Nagorno-Karabakh. These drones, equipped with WESCAM sensors, were not only illicitly supplied to Azerbaijan, but remain in its possession, and would likely be used in further large-scale acts of war.

It is certainly true that civilians now living in Nagorno-Karabakh face some level of risk due to ceasefire violations in the border regions. Civilians suffered significantly during the 2020 violence.

WS: Did the war in Ukraine seem to be of interest to the Armenians you spoke with?

KG: The war in Ukraine is a major topic of interest in Armenia, especially due to the Armenian government’s close ties to the Russian government. The average Armenian, like the average Canadian, simply wants to see the violence come to an end.

Photo: Kelsey Gallagher, third from left, participates in a panel on human rights. Photo: courtesy of Center for Truth and Justice